Going the extra mile to assist Austin residents, military, police and other service personnel in self defense training and defensive tactics. ASD announces a 2 FOR 1 special for $99. ASD is known for its realistic and no nonsense approach to street survival and conditioning. Classes are offered and structured for persons of all athletic abilities, from ages 7 and up. Conditioning drills are incorporated to build speed, endurance, 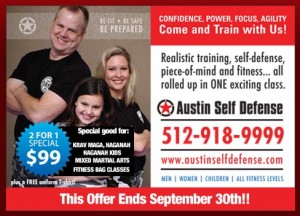 flexibility and cardiovascular system which results in a complete and well rounded athlete. Additionally, ASD concentrates on the mental conditioning and respect that builds discipline and focus.

Austin Self Defense unique class structure and training methods allows for persons with little to no training as well as those with advanced backgrounds to train together yet advance on individual levels accordingly.

According to the National Center for Missing and Exploited Children report, 797,500 children are reported missing each year. In addition to the possibility of abduction, kids are continually faced with school yard bullies who can have a traumatic effect not only on the child’s education and motivation in their studies but also long term effects concerning personality and emotional trauma. ASD offers ‘Haganah Kid’s’, a mixed martial arts (MMA) program for preteens. The program comprises the best practical self defense techniques that suit child learners. Just as importantly, kids will learn life skills such as Respect, Courtesy, Self-Control, Perseverance, Confidence, Self-Esteem and much more.

Emphasizing the importance of self defense and fitness training as a combined discipline, Dan Kiser, President of Austin Self Defense says, “Students will learn techniques relating to the defensive as well as offensive side of an engagement/attack. Just as important, students benefit from improved confidence, peace of mind, less stress, and increased energy and endurance,” he adds.

“Instructors are amazing – both knowledgeable and passionate about their work. There is a very welcoming feeling of companionship and high energy in the classroom. The classes have helped increase my assertiveness and confidence, as well as my physical fitness. I would highly recommend Austin Self Defense” – – Shannon

I was an assistant Combatives Instructor for my unit, in the military, and the Haganah course has allowed me to pick up, right where I left off. ASD is keeping me Army Strong! Hooah! – – Ryan

About Austin Self Defense:
Austin Self Defense is a self defense and fitness training facility which was established in 2002. The Texas Self Defense company is known for its unique and precise approach in providing superior martial arts and conditioning. The programs are designed for all ages and physical capacities incorporating real life military survival skills and mindset to eliminate the danger quickly and without hesitation.

You see it on the news time and time again – American students are falling behind the rest of the world in Mathematics, Science, and other subjects. In fact, a recent study published Nov 14, 2007 by the American Institutes for Research puts American children far behind their foreign peers in regards to math and science.

It was this very notion that led to the birth of a new virtual learning website dedicated to bringing US students the best educational curriculums the world has to offer.

Launching earlier this month, Cybershala.com is the brainchild of Ripujeet Sharma, an engineer who found his own children were having trouble with math. Being a world traveler, he did some research, and found a few interesting notions. “In my research and studying other curriculums, I found out there was a huge ‘learning gap’ in what was being taught, and what could be learned” says Sharma “In essence, we’re doing it backwards, and that’s why we are ranking so low.”

Sharma took the next logical step and created a substantial website that acts as an online learning portal. His website offers an international curriculum via online virtual classes, and is aimed primarily at home schooled children and public school students who need extra help. The first offering is what his own children had trouble with – math.

“The website is starting out by offering what is called ‘Singapore Math’” commented an excited Sharma “and Singapore Math is simply a name for the Math Curriculum they teach to students in Singapore, whom have consistently ranked amongst the highest in the world.”

Indeed, Singapore Math has gained worldwide respect, and differs from other math curriculums because it utilizes a visual approach to problem-solving instead of solely a memory-based one.

Sharma also built the educational and online learning website to be, in his words, “effective, accessible, and affordable. We have the best instructors, an affordable price of $10 per hour, and the benefit of teaching the best curriculum around.”

The classes themselves are also different, exclaims Sharma: “The classes differ from traditional online classes in that there is real interaction. We have textbooks and workbooks that we provide, and small 6-person virtual classes with face-to-face live video. The child is in their home, but they can see and hear the teacher, and vice-versa, in real time.”

“In other words, it’s a real class” adds Sharma.

While the website has launched with the focus on k-12 math, Sharma also plans to add science and technology based curriculums in the near future, making cybershala.com a well-rounded answer to some of America’s most troubling academic questions.

About Cybershala.com
Cybershala.com inc. is an online educational portal dedicated to bringing the best of international curriculum to the US, and to close the “education gap” between what is taught, and what can be learned. Their first curriculum is the highly successful “Singapore Math”, which they offer via virtual classrooms.

Smarter Toddler Nursery and Preschool in New York City has announced a ban on the phrase Terrible Two’s insisting that the term encourages and excuses bad behavior in Toddlers. “A two year old who people refer to as a Terrible Two may need either more physical activity, more stimulating academic challenges or simply

more 1-on-1 attention,” said Jessica Collins, spokesperson for the school, “At Smarter Toddler we don’t believe in the phrase Terrible Two’s. What we do believe in is giving a child a combination of attention and special activities that help to keep their minds off of the need to begin what some would describe as bad behavior. Smarter Toddler does that by providing children with a warm, loving, fun environment that focuses on the artistic, cultural and social development of each child”.

The teachers and management of Smarter Toddler would like the support of not onlyparents with children at their center but also parents, guardians and teachers everywhere to not use the term Terrible Two’s.

About Smarter Toddler:
Smarter Toddler is a Daycare Center and Preschool on Manhattan’s Upper West Side founded by parents of gifted toddlers who wanted a progressive preschool with an advanced arts-based curriculum that their own children could benefit from, hence the name. It has long been proven that a child’s brain is like a dry sponge capable of absorbing knowledge at a much faster rate than an adult’s. As a result, at Smarter Toddler you’re never too young to begin learning. Since the firstSmarter Toddler location at 89th street became popular a new location at 55th street and 9th avenue near Lincoln Center is planned for September 2007.

EPR Education News is a new blog, part of EPR Network, that is going to be focused on and will be covering the education news and stories from press releases published on EPR Network.

EPR Network (EPR stands for express press release) is one of the nation’s largest press release distribution networks on Web. The EPR’s nationwide network includes 12 State based PR sites, one major PR forum and a number of industry specific PR blogs and what started as a hobby on Internet years ago turned out to be a rapidly growing business today. EPR Network is also known as one of the most trusted (human optimized, published, edited and monitored, spam/scam/low quality PR content free) PR sites on the web with more than 10,000 company and individual press releases distributed per month. EPR Network is putting your press releases on top of all major search engines’ results and is reaching thousands of individuals, companies, PR specialists, media professionals, bloggers and journalists every day.

EPR Network has thousands of clients around the world including global 500 corporations like Hilton Hotels, Barclays Bank, AXA Insurance, Tesco UK, eBay/Skype, Emirates, just to name a few. The network’s PR web sites are currently reaching from 150,000 to sometimes 500,000 unique visitors per month while our viral reach could possibly go to as much as 1M people per month through our presence across various social media sites. EPR Network was established in 2004 and as of May 2008 it had more than 800,000 press releases (pages) published on its network.